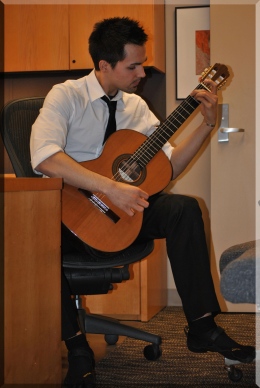 Academic adviser Justin Edwards practices his guitar in his office at Youngstown State University. He sings and plays piano in his band, Neon Avenue. Photo by Ashley Morris/The Jambar.

Justin Edwards, an academic adviser at Youngstown State University, has a paramount passion for music, which he has used to express his life since he was a child.

Edwards is the lead singer and pianist of Neon Avenue, a progressive indie rock group stationed in Youngstown. Although he is taking a break from the band to work on his songwriting, he said the group began in order to relieve the stress of today’s fast-paced society.

“We live in such a technological world,” Edwards said. “There really isn’t a lot of time to relax.”

However, the purpose for Neon Avenue ran a lot deeper than just relaxation. For Edwards, it was more about personal discovery and emotional release.

“I think Neon Avenue is the last step to getting to where I am now,” Edwards said. “I’ve always been interested in discovering more and more.”

Neon Avenue played around the Youngstown, Poland and Boardman areas and has also done charity events like Relay for Life.

“Music was one of the easiest ways I knew how to give back growing up,” Edwards said.

The son of two former music professors at YSU, Edwards was exposed to many kinds of music. From a young age, he was taught the Suzuki method, which teaches children how to rapidly memorize music.

“I would say this is why I was able to get through high school so quickly and where my interest in music began,” Edwards said.

Edwards graduated from high school at age 16. At 21, he is already an academic adviser in the YSU College of Fine and Performing Arts.

He said his passion for music motivates him to help other children unearth their own love of music with the Rotaract Club, a rotary club Edwards recently created to combine a love for music with community service.