Part-time faculty at Youngstown State University gathered in Kilcawley Center Friday evening to raise attention to the fact that their last raise was 25 years ago.

James Zupanic, an adjunct professor who retired from full-time at YSU, organized the event. Zupanic said he began arranging meetings to address the issue in 2013 and there was a significant response.

“At that point, [part-time faculty] hadn’t gotten in contact by anyone who was trying to do anything [about the issue],” he said. “It was mainly the people that had been teaching for a long time [who] realized the situation.”

Zupanic said he wanted to arrange something unique this year. The theme of the event was to emphasize how long 25 years has been, making something lighthearted out of a negative situation. 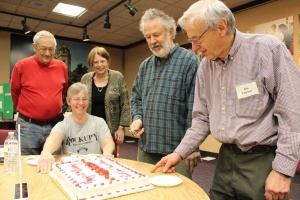 Attendees were treated to an anniversary cake and games, as well as informational posters to compare grocery prices and a timeline of YSU events within the past 25 years.

Kathy Durrell, part-time physics professor, said the event helped raise awareness for adjunct professors’ issues, particularly when that is their only job.

Part-time faculty, varying from short-term to long-term, attended the event. Zupanic said some of the faculty members have been teaching for more than 30 years, regardless of low wages.

“I think that many of them are not doing it for the money to begin with,” Zupanic said.

Tony Armeni, part-time art professor, said he does not regret the decision to become a part-time faculty member.

“The whole gig of teaching and interacting with young people is a pretty cool thing,” Armeni said. “Most people don’t get to do that.”

The adjunct faculty have attempted to improve the situation without luck. Armeni said adjuncts met with the United Steelworkers two years ago to form a union, but the partnership never lifted off of the ground.

“People were meeting and talking, but [it] really never gained much traction for a number of reasons,” Armeni said.  “People didn’t want to stick their necks out and work contract labor essentially … We may come back next semester, we may not.”

A part-time advisory committee was established by the administration to work through problems and solution for adjuncts. Durrell said the committee has been in discussion with Provost Martin Abraham, who is trying to get a raise through.

Student tuition and fees have increased by 270 percent over the past 25 years, Zupanic said. He also said an additional one-percent increase would fund the part-time raises.

“The best situation would be to have a decent raise and competition with other universities,” Zupanic said. “We can’t get out of whack with what other places are paying either, but I think an amount that would be significant [without] damaging the finances of the university would be very well appreciated.”

If a raise were to happen, Zupanic said he would like to encourage other universities to do the same.

“I’m going to make sure the other universities know that [the administration] did something for the people here,” Zupanic said.

Zupanic said he is thankful for the people who have been supportive and hopes to see events such as these pay off in the future.

“I just want to keep people feeling like somebody is trying to do something,” Zupanic said. “There’s some support by chairs, support by deans, but we’ll see if it goes anywhere.”