By Elizabeth Lehman and Laura McDonough

Last fall, the communication studies program made its official move into the first floor of Meshel Hall at Youngstown State University. Over the last several years, the proposed move has been a point of contention at the university.

In March 2016, the Jambar and the Vindicator reported that the late former trustee Harry Meshel had walked out of an academic quality and student success committee meeting. His sudden exit was caused by a heated argument about moving communication classrooms into Meshel Hall, which had been named in his honor in 1986.

Meshel had said he perceived a lack of interest in the computer sciences from the university.

“No one has done anything with that building but invade it,” Meshel had said.

Approximately two years ago, a call to action came for people to sign a change.org petition, asking people to “Save YSU Meshel Hall for Computer Research and Education.”

As of Jan. 5, the petition has 777 signatures of the requested 1,000 signatures, with many comments.

Despite the obvious discontent from computer sciences, communications still made the move from the basement of Maag Library to Meshel Hall last semester.

Amy Crawford, acting chair of communication since July, said the space is working well for the department’s classes and she has received positive feedback from faculty.

Crawford said the space is needed, especially because of the high volume of students who take Communications 1545: Foundations of Communication, which is a general education requirement for every student. She said last fall close to 1,500 students were enrolled in the course, and the number is growing all the time.

“There are more students opting to take the traditional face-to-face sections rather than the web-based sections,” Crawford said. “It is required of all students at the university as part of the core competencies for the general education requirement. We always do have many sections that are always very highly enrolled.”

Crawford said while 1545 was a driving force in the move to Meshel Hall, the space is also being used by telecommunication, journalism and other communication classes.

Crawford said she has not personally received any complaints about the communication program’s presence in Meshel Hall.

“It is always a challenge to try to find the way to share space, so we’re just trying to serve our role and the needs of our students and we’re also trying to be a good neighbor in that space and I haven’t heard otherwise,” she said.

There are plans in place which could give computer science students more room to work.

Provost and Vice President for Academic Affairs Martin Abraham said the data center on the fourth floor of Meshel Hall will be moving to a shared facility off campus, possibly in Columbus.

He said the process is still in the early planning stages, so the details aren’t finalized, but he expects the space to go to computer science students.

“They’re moving out a whole bunch of their servers and their activities so that there’s some space available and we are going to access that space for computer science growth, regrowth really, in order to accommodate the needs of the department,” Abraham said. “We really are looking at it as an opportunity to expand for the new faculty that we are going to be adding and continuing to add.”

Abraham said the computer science faculty has decreased in the last five or six years.

“We felt that it was reasonable to compress their space and then as we added more faculty, we would find the appropriate space to meet those needs as well,” he said.

Abraham said the university is on the right path to making good progress for the computer science program.

“We are following through with the plan exactly the way that I had envisioned. Maybe I didn’t share it or communicate it as effectively as I could have in terms of the broader population,” Abraham said. “The chair has a good handle on the things that he’s trying to achieve and we’re going to create the space we need in order to accommodate their growth.”

“Currently we have a total of 10 faculty members,” he said. “The student-to-faculty ratio is too high and needs to be reduced. If not, we will have problems during the accreditation process.”

Bayrak said in the next four years, computer science plans to hire four more faculty members in networking, security, scientific visualization and gaming. He said the plan is to use the fourth-floor space to complement those areas. 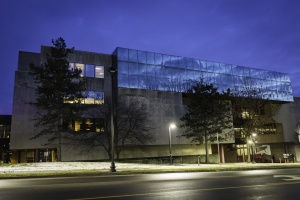 Bayrak said currently there is almost no sharing of space happening on the first floor of Meshel Hall. He said there are two classrooms on that floor computer classes might use if they are available, but they are ultimately controlled by communications and can be hard to get into.

“During the programming contest, we wanted to use [room 103] for the opening ceremony in October but we could not get in,” Bayrak said. “Even President Tressel called some people to see if we [could] get it open but did not succeed.”

He said moving computer classes to the fourth floor will help to some degree, but he said he still will not have space for large lectures of 50 or more students.

“Small classrooms are a good learning environment when there are enough resources, such as instructors,” Bayrak said. “Now we don’t have enough instructors and we end up cancelling some classes. If we have large classrooms, then we can accommodate the needs of students a little better.”

He said computer sciences has requested two large rooms on the second floor to use for conferences and lectures, but they haven’t heard back about it yet. Until the fourth-floor space becomes available, Bayrak said for now computer sciences is limited to available spaces on the third floor.

Bayrak said he doesn’t expect the fourth floor to be ready until 2019 or 2020. Until then, he said the challenge of finding space for computer classes remains a problem.
“We are working on the issue and hope to find a solution for it,” Bayrak said.