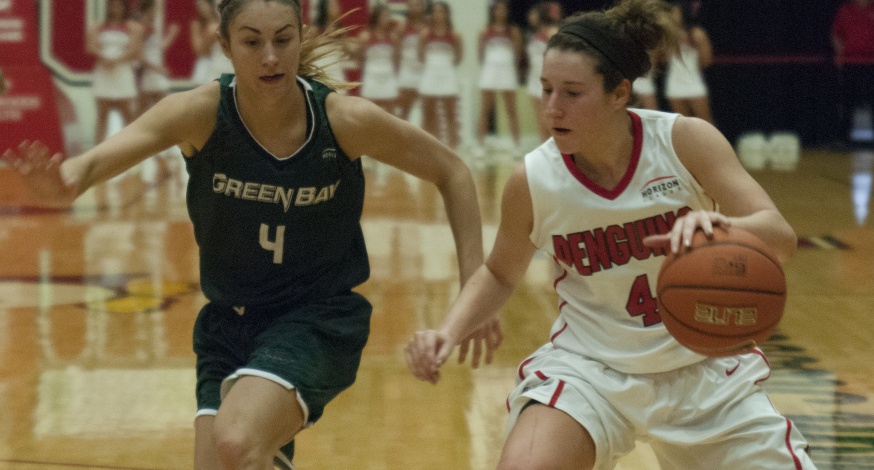 The Youngstown State University women’s basketball players said the team would have to play “40 minutes” of good basketball for YSU to beat the University of Green Bay for the first time since the 2013-14 season.

But a slow start in the third quarter derailed the Penguins hopes of knocking off the Phoenix, and YSU eventually lost 68-60 on Saturday.

“I thought we played well about 95 percent of the game and that was the part, I thought, that let us not come out with the win,” YSU guard Nikki Arbanas said. “We need to play, against a good team like that, 100 percent of the time—full effort, more aggressive than them and play harder than them.”

After Thursday’s win over the University of Wisconisn-Milwaukee, YSU head coach John Barnes said the Penguins needed to avoid a slow start against Green Bay.

YSU (12-3, 3-1 in the Horizon League) was able to get off to a strong start to begin the game. The Penguins were 5-11 from behind the 3-point line in the first quarter. YSU took a 20-17 lead after YSU forward Kelsea Newman hit a buzzer-beating 3-pointer at the end of the first.

The Penguins’ offense struggled in the second half. YSU shot 3-13 in the third, but they started to turn things around in the fourth quarter. Arbanas said the team became less aggressive in the second half and started taking lower-percentage shots.

The Penguins were able to cut the Green Bay lead to 60-53 with 4:21 left in the game, but YSU was unable to come up with enough defensive stops to complete the comeback.

Barnes said the players could us this as a learning experience for the next time they play a quality opponent. He said the team would have to learn to execute better in all phases of the game.

“We could play with one of the best teams in the country — in the Midwest for sure. I think they learned that we need to execute better,” Barnes said. “Execution really hurt us in the second half in terms of what we ran defensively and who we were guarding. What we wanted to run offensively, being able to come down and execute those things — that hurt us. I guess learning that we got to execute better.

“We got to really dig down and get stops when we need to. Can’t give up offensive rebounds. We gave up 12 offensive rebounds, which led to 13 second-chance points. We had four. We can’t turn the ball over…14’s not bad but against a really good team, we got to be at eight. They doubled us up in points off turnovers.”