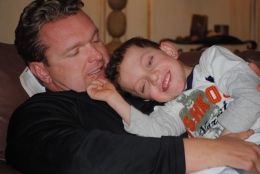 Eric Wolford spends every day with his son Stone like it’s their last.

It very well could be.

Stone Wolford suffers from cardiofaciocutaneous syndrome, a genetic disorder that affects a child’s neurology and development.

According to CFC International, an estimated 200 to 300 people suffer from this disorder worldwide. On average, children with CFC live between four and 14 years.

“You can’t take things for granted. Every day I leave the house, I don’t know, when I come home today, if Stone is going to be there,” said Wolford, Youngstown State University’s head football coach. “I hope, and sometimes I assume, but that’s the reality of it. We’re on borrowed time right now. We just have to enjoy every day we got him.”

The differences were noticeable. He had a hole in his ear, droopy eyelids, difficulty focusing and difficulty feeding. After his stagnant growth and weight, his language also suffered.

Melinda Wolford said he was very delayed in typical milestones. He did not start walking until he was 18 months old, and his muscle tone was low.

After numerous tests and more than 40 doctor visits, the family realized they needed to adjust.

“At the time, I was so stressed. It was hard for me to enjoy him as much,” Melinda Wolford said.

Three years into their marriage, Melinda and Eric Wolford were forced to rethink the kind of child their son might be.

“We had to learn about what kind of things might happen, how long he might live and how we would adjust to that and support each other,” Melinda Wolford said.

The experience has been stressful.

“I’m not going to say I’m not tired. I am. But it makes us live life with a purpose,” she said. “I feel very fortunate because he reminds us every day of what’s really important. He reminds us that those ideas we had for him were selfish ideas.”

Because of their busy schedules, Melinda and Eric Wolford need assistance. Since the birth of their daughter, Marlee Wolford, their babysitter and long-time friend Carol Goodrick has helped out with the kids.

Goodrick watches the children when Melinda Wolford is teaching special education, counseling and working for the school psychology program at the Beeghly College of Education.

Meanwhile, Eric Wolford is recruiting, practicing and traveling with the Penguins.

“I’m here Monday through Thursday and some Fridays. When they go away for football and other conferences, the kids like to go to my house,” Goodrick said. “I take them to the barn with the horses, the mall and the park.”

“That adversity that you have in your life and how you handle it is really when you start to find out who you are,” he said. “God has a very unique way of humbling you sometimes … and Stone has done that.”

When Eric and Melinda Wolford spend time with their children, they cherish every minute.

Melinda Wolford recalled a recent morning when she and her husband were able to sleep in until 7 a.m.

“On the day we can actually sleep, Stone is in there at 5 a.m.,” she said. “And I love Eric’s attitude because he says, ‘God knows what he’s doing. He’s in here this early this morning so that we can snuggle with him and enjoy that extra time.’”

Although Stone tends to enjoy affection from his mother, Eric Wolford said he likes to play around with his son.

On Friday, Eric Wolford arrived home just before 6 p.m. He picked up his son, tickled him and held him upside down by his legs.

“How’s it going, Stoney?” Eric Wolford said. “How was your day, buddy?”

He laughed as he dangled Stone Wolford over the couch.

Stone smiled for a minute, and then quickly wanted to be put back down.

“He’s such a momma’s boy. I tease him quite a bit. I encourage him to be physical,” Eric Wolford said. “So, that way, I can get a reaction out of him. That’s just the way I show him affection.”

For the Wolford family, variable change is to be expected.

He wakes up one way or the other,” Eric Wolford said. “He’s fun to be around, and I think it makes you appreciate life.”

Eric Wolford said he always liked the unique name after Stone Phillips, the television correspondent from “Dateline NBC.” He said he laughs when people ask if his son is named after the wrestler Stone Cold Steve Austin.

Although naming him “Stone” was unintentional, the name bears more meaning today.

“Now, it has a completely different meaning because of just how difficult it’s been,” he said. “You know, a stone is hard and very strong.”

While searching for comfort and reassurance, the Wolford family realized they weren’t alone.

Their medical expenses increased, and their insurance company didn’t want to pay for a helmet for Stone.

“His head was odd shaped. They said it was not within a millimeter of the measurement that it needed to be in order to pay for it,” Eric Wolford said. “So, we realized there is a need out there with people that have kids with disabilities.”

A foundation written in ‘Stone’

In 2008, the family created No Stone Unturned, a foundation dedicated to raising awareness and funds for research.

Pam Barton to attend a CFC conference in Chicago to learn more about the disorder. The foundation also donated three iPads for Stone and his classmates. The iPads are beneficial to the learning process because they help students communicate and express themselves.

“It’s really nice because there’s all kinds of educational games on there. We can work on speech goals and fine motor,” Barton said.

“It really hits every area of development. There has been just a ton of growth on his communication and his ability to tell us what he wants and needs.”

Melinda Wolford has yet to keep her son still for an entire football game because of the sea of sounds and the people.

“He has a different interpretation of what’s going on in his environment. He gets fussy after a little while,” she said. “It’s not comfortable for him. We let him experience that up to a point, but we have to be really careful about crossing that line with him.”

Eric Wolford often brings his son to the locker room. He said he thinks other kids need to see that they’re lucky.

“You think you got it bad because you got to go to 6 a.m. running in the morning because you missed study hall or missed class,” he said. “It could be a lot worse. Stone will never play football. I will never walk across a field with him on Senior Day. It’s not going to happen.”

The Wolford family said the foundation has turned into something bigger than they expected, yet they try to remember the small things.

“He makes me such a better person,” Melinda Wolford said. “And it’s because of his differences that I recognize the value of every single minute. We’re going to get frustrated, we’re going to get mad at people and we’re going to make mistakes. But … I don’t want another Stone. He just resonates love, and he doesn’t know any different than that.”