James Yukech stepped in as the new chief information officer and interim associate vice president of Information Technology at Youngstown State University. Yukech began working at YSU in May as an independent contractor for the IT department before filling the CIO position last month. 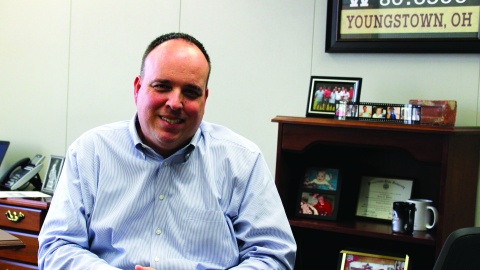 Yukech worked for Mercy Health for 26 years, where he spent 15 as the vice president of IT relationship management and associate CIO in all Northern Ohio markets. Yukech said his previous experience will help with this new position.

Chris Wentz, associate director of the Office of Network Security, said he looks forward to what Yukech will bring to the table.

“We’re always anxious to see what an outsider brings,” Wentz said. “[Yukech] has had many years in the healthcare industry, and I think that will bring an interesting dynamic.”

One of Yukech’s primary goals is to establish an IT governing structure within his first 90 to 120 days.

“We’ve had a lot of loose committees, but the committees are sort of on islands,” Yukech said. “There’s no formal governing structure. I think I can bring that.”

Information Technology Services at YSU have undergone various recent changes, which were addressed in an email Yukech sent to IT users on campus.

Ken Schindler, the previous associate vice president of Information Technology, left YSU to spend more time with family in Wisconsin, according to Yukech.

YSU’s IT department dropped from around 80 full-time employees to 52 within the past six years. Yukech said this can be traced back to technology.

“Technology’s changed a lot in the last five to 10 years,” Yukech said. “What was all your on premise apps and that are moving to Cloud-based applications. They don’t require as many resources.”

With change, Yukech said there are challenges to overcome.

“It’s always hard to manage IT in a fiscally constrained environment,” Yukech said. “And the tighter the finances are constrained, the harder it is to manage those valuable IT resources.”

Yukech said it is essential for his team to prioritize IT efforts as a campus community, which will be done with a governing structure.

“That’s our foundation,” Yukech said. “We should be targeting to make sure the majority of the projects we are working on are lending to and enabling students’ success.”

Wentz said Yukech has interviewed department chairs, staff and faculty leaders and student groups to find out how they can benefit from IT services. He said these interactions will be beneficial to the campus.

“You want as many voices at that table when you start making very large decisions,” Wentz said. “I think that’s one thing Jim [Yukech] has already started to engage.”

Yukech, a YSU alumnus who received his master’s degree in 2015, is a lifelong Youngstown resident. He said he comes into the position with a fresh view of campus and looks forward to working with its leaders.

“It’s really the diamond of this community,” Yukech said.