Clean eating has become a universal catchphrase in food marketing in recent years as many consumers are concerned with eating organic, non-GMO food. However, in October 2017 a food packaging company made headlines by electing to remove non-GMO labeling from some products.

Mann Packing, whose U.S. headquarters is located in Salinas, California, has opted to stop printing the non-GMO labeling on its lettuce.

In an interview with PRWeek.com, Gina Nucci, Mann’s director of corporate marketing, said the company didn’t feel right about using the label.

“It made us go, ‘Why are we doing this?’ We are perpetuating a fear that something is wrong with GMOs. We didn’t feel right doing that, so we chose to take that label off,” Nucci said. 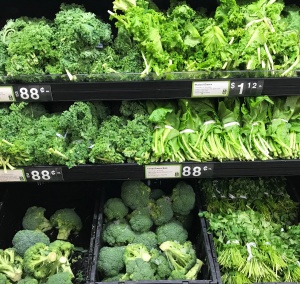 Zara Rowlands, associate professor and chair of human ecology at Youngstown State University, and a registered dietician, said she agrees with Mann’s reasoning about GMO labeling feeding into consumers’ fears.

“It is fearmongering. Our food supply would shrink considerably if we only went non-GMO,” Rowlands said.

However, some other faculty members at YSU do not agree.

Debbie Smith, a part-time faculty member of the YSU chemistry department, said recently changing her diet to cut out gluten, dairy and processed foods has improved her health noticeably.

On Christmas Eve 2016, Smith said she fell ill and collapsed in a restaurant. She was taken to the hospital and consequently diagnosed with four autoimmune illnesses, including irritable bowel syndrome.

She said prior to the incident on Christmas Eve, she had never had any problems before. But she became so ill, she had to quit her job at YSU during that time.

While seeing a doctor at the Cleveland Clinic, she was referred to the facility’s Functional Medicine clinic.

“It’s a holistic center where they promote healthy living through eating, exercise, stress management, and I thought why not, because I didn’t want to be on medicine if I didn’t have to,” Smith said.

To be seen by a doctor in the Functional Medicine department, a patient must attend classes for ten weeks. Smith is on her eighth week and said she has seen a major change in her health since following the guidelines presented in the clinic.

“Basically, they want you to eat foods that rot in a couple days, anything that has a shelf life of a week or more, and a lot of foods out there do have these long shelf lives, aren’t really good for you. I’ve noticed a huge difference,” Smith said.

Christine Cunningham Yukech, a part-time chemistry teacher at YSU, said she is also going to be teaching at the Falk School of Sustainability & Environment at Chatham University beginning in the summer.

She is currently at work developing Biomonapp, which can help people using sustainable farming techniques to monitor fish, water and plant health with their cell phones.

Cunningham Yukech advocates for fresh, natural, non-GMO foods, but said people need to know where to get these foods.

“The food dyes, the synthetics, everything they put into these [packaged foods] to get the shelf life, to have them last, is really bad for kids,” Cunningham Yukech said. “It’s bad for everybody, but we have a problem.”

Cunningham Yukech said if people were able to get such foods conveniently and were able to taste and smell the difference in produce, they would want to go back for more.

Cunningham Yukech also said her health has improved considerably since transitioning from synthetic foods over 15 years ago.

Although Cunningham Yukech is in favor of organic non-GMO foods, she said there is also a good side to the technology being used. She said a project in Akron is looking at using proteomics, a branch of biotechnology, to increase the nutritional wealth of plants.

“They are looking at how we can use genomics to improve the quality and the health of the plants and our medicines; you might not have to take medicine for an inflammatory [disorder] in the future,” Cunningham Yukech said. “You might be able to eat the lettuce that’s already got the anti-inflammatory in it.”

2 thoughts on “A Look at Clean Eating”