Lolita fashion, a popular style in Japan known for its lace, ribbons, bows and ruffles, is common on the streets of Harajuku, a district of Shibuya, Tokyo, and has now made its way to Youngstown.

When Samantha Sakmar, a senior psychology major at Youngstown State University, decided to adopt Lolita into her wardrobe because the feminine, modest and unique style just clicked with her.

“It’s what I like and who I am,” she said. “I can’t remember exactly how I found out about Lolita, but I was mesmerized from the very start.”

Sakmar said she has had an interest in Japanese fashion for 11 years and began wearing Lolita in 2012.

“I usually get positive reactions from people, and they are amused and curious about Lolita,” she said. “A lot of people say things like I’ve brightened their day with my style.”

Sakmar typically wears Lolita to meet up with other Lolita enthusiasts, attend anime conventions or at random when she has free time. 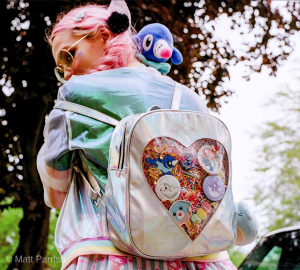 “Winter and fall are the best times to wear Lolita for me because of how many layers are involved in the style,” she said. “Physically, the style can get uncomfortable at times, but I feel good overall when I wear Lolita.”

“Getting started is expensive and can cost anywhere from $150 to $300,” she said. “Being able to sew and make accessories and alterations to dresses also helps people who are interested in the style.”

The Lolita trend started in Japan in the late 1980s and has a doll-like look that originates from Rococo and Victorian eras. The style also presents several sub-fashions, including Classic Lolita, Gothic Lolita, Sweet Lolita, Punk Lolita and Hime, or Princess Lolita.

Today, Lolita fashion shows are commonplace at anime conventions and other types of conventions around the world.

Laura Ashley, a graduate student at YSU, said when she first met Sakmar years ago, she was able to attend her first Lolita tea party meetup.

“Because of [Sakmar], I was able to expand a bit further out into the Lolita community,” she said. “I now have so many more friends who share the passion that I have with me for our love for Lolita fashion.”

Ashley said the best part of Lolita fashion is its diversity.

“Lolita fashion lets people understand the world around them and become further educated,” she said. “It is excellent to ask oneself, ‘Why does this culture choose to have this type of fashion versus another culture?’”

Because the style is also diverse with its sub-fashions, Ashley said Lolita caters to a large group of Japanese fashion enthusiasts.

“Lolita is not limited to light, bright colors … This makes it easier for me to help others find out what styles that they might be into,” she said. “I also love how different Lolita is from my casual wardrobe, so I feel like I can escape from mundane clothes and have a bit of spice to my life with something different.”