I’tavious Harvin and Darien Townsend are the top candidates to take over as the main targets in the passing game this season.

Harvin started in eight of 11 games last year but finished with only 22 catches for 279 yards and two touchdowns.

“I see this as a great opportunity for me as the only guy really coming back with experience,” Harvin said. “I’m really looking forward to this year.”

Harvin also spent last year as a kick returner, but said he would like to start returning punts as well this year. Harvin said punt returning was a “strength in high school.” Harvin had five returns for 60 yards last season. 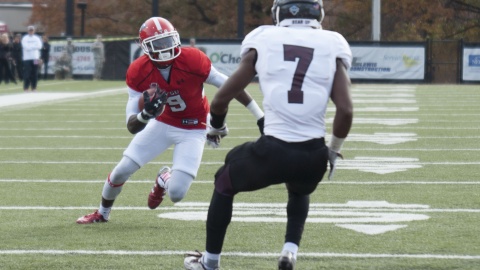 Townsend, on the other hand, does not have much experience as Harvin. While Townsend did play in all 11 games a year ago, he did not provide much of a spark for the Penguins — catching nine passes for 99 yards.

Townsend, a junior, didn’t play much because of the depth the Penguins had at receiver last season. He said he had to adjust to taking more of a leadership role this season.

“It’s really been fun taking on a leadership role along with ‘Te’ [Harvin]. Just competing with the first string guys and DB’s [defensive backs] we have they’re making us a lot better,” Townsend said.

While it may have taken the rest of the receivers a while to understand the offense and contribute, Harvin said the other receivers are starting to catch on.

“It’s been a little frustrating at times,” Harvin said. “Getting into spring ball was probably the most frustrating, but they came along and now they know their plays and don’t have to second-guess themselves.”

Townsend said if this year’s quarterback for YSU is going to have any success, it will be key for the young and inexperienced group of receivers to progress quickly.

“We just need to do the right things,” Townsend said. “We need to achieve what we need to do on every play and just focus play-by-play and we’ll be good as a receiving corp. We got a long way to go though.”