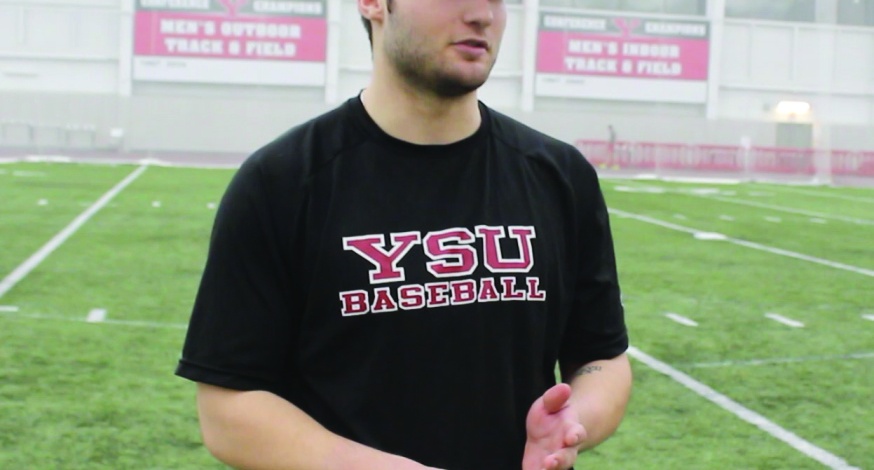 The Rohan Cousins Play Together for the First Time at YSU

On July 11, Gerrad Rohan received an email that changed his life and his collegiate baseball career. The University of Akron notified that they had discontinued its baseball program and left the North Lima, Ohio native with nowhere to play.

“The first thought after I found out … I was kinda shocked. It kinda came out of nowhere,” Gerrad Rohan said. “I started scrambling; I called my parents and told them I needed to find somewhere to go. It’s my last year. Initially I wanted to stay around the area. Before talking to any schools, I was thinking either here [YSU] or Kent State [University] just so I could be close to home.”

“I actually found out from Gerrad’s dad. I got a call on a Saturday in the end of July,” Anthony Rohan said. “My first reaction was to call ‘Coach G’ [Steve Gillispie] and tell him ‘Akron just cut their program. I know you remember my cousin … he played great against us. I think he would be a great fit if we have any spots left,’” Anthony Rohan said. “I remember him saying ‘We’d love to have him, but we have a couple spots left, and we offered it to two people already. If they turn it down we’ll throw some money his way.’”

Anthony and Gerrad Rohan are “pretty much brothers” that have taken different paths during their baseball careers.

Anthony Rohan, a graduate of Ursuline High School, was a talented baseball player but injuries were a roadblock during his high school career. He tore his hamstrings three times between his sophomore and senior seasons.

Anthony Rohan was redshirted his freshman season at YSU as a result of his hamstring injuries. The coaching staff wanted him to take a year off from his playing career to recover fully.

Gerrad Rohan, on the other hand, began his career at Akron in 2012. He played 18 games as a freshman and recorded his first collegiate hit as a pinch hitter against YSU at Eastwood Field.

After being redshirted his junior season, Gerrad Rohan had his best season at Akron. His .294 batting average was second on the team and his 28 RBIs ranked third.

For the Rohan family, baseball has become a way of life.

Even though they grew up together, this season will be the first time Gerrad and Anthony Rohan play on the same team.

“We all felt bad for ‘G’ [Gerrad] because it was his last year at Akron. It stinks to leave all your friends and go to a new school,” Anthony Rohan said. “From a selfish standpoint, I never got a chance to play with ‘G’.”

Gerrad Rohan said he has thought about playing with his cousin, but the reality of it probably won’t dawn on him until his return to Eastwood Field during YSU’s first home game.

“I was really excited. He’s like my best friend; he’s like a brother to me,” Gerrad Rohan said. “Since we’re from the area and we have a really big family, I was really excited for all our family to come out to all the games at Eastwood [Field].

“I don’t think I’ll process that until our first home game — until we have everybody there watching us. I definitely have thought about it a lot … I couldn’t think of anybody better to be a teammate with.”