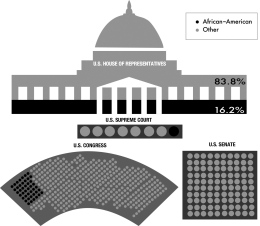 Despite President Barack Obama’s election in 2008, race remains a factor in U.S. elections and politics.

Of the 1,320 federal judges, only 125 are African-American. The U.S. Office of Personnel Management shows that from 1994 to 2006, the number of African-Americans employed by the executive branch has decreased from its peak at 17 percent of employees to its current level of 16.2 percent. Postal employees were exempt from the study, but members of the armed services were included.

Michael Tesler, an assistant professor of political science at Brown University, argues that Obama’s election has brought about the return of “old-fashioned racism” in a study titled “The Return of Old-Fashioned Racism to White Americans’ Partisan Preferences in the Early Obama Era,” which appeared in the Journal of Politics.

According to the study, Obama’s presidency is responsible for a resurgence of racial attitudes in U.S. politics.

The SPLC suggests that Obama’s election and a perceived decline of “white privilege” is causing this proliferation.

A dinner hosted by the Youngstown Warren Black Caucus underscored African-American feelings toward the 2012 elections and the upsurge in white partisanship. John Lewis of Georgia’s 5th Congressional District recalled the great lengths many went to integrate the U.S.

Lewis is remembered as one of the “Big Six” alongside Martin Luther King Jr., James Farmer, A. Philip Randolph, Roy Wilkins and Whitney Young.

Recalling his role in the Selma to Montgomery marches, Lewis and around 600 other marchers were attacked by Alabama state troopers when they attempted to cross the Edmund Pettus Bridge.

“I gave a little blood on that bridge,” said Lewis of his efforts to peacefully integrate the South.

Lewis expressed the importance of voting then and now.