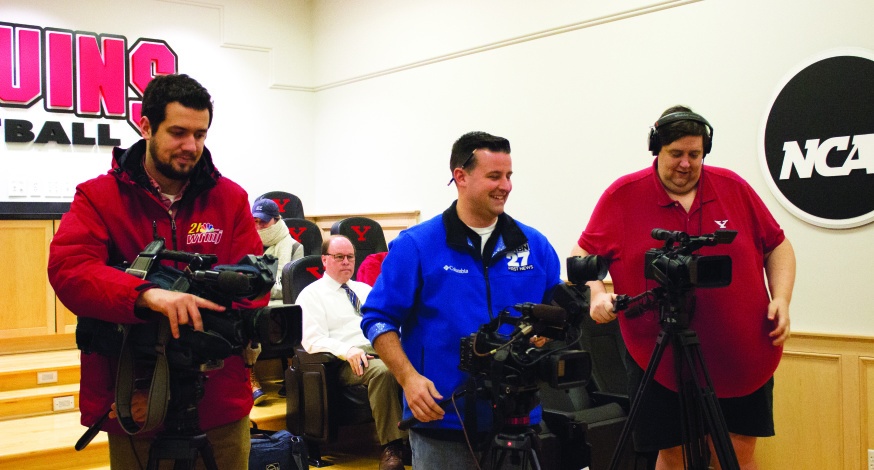 How College Athletics Changed the National and Local Media

College athletics can be seen everywhere. Every Saturday throughout the year you can turn on any local, regional or ESPN station and see a college football or basketball game.

Doug Lesmerises, the Ohio State University football and basketball beat writer for the Cleveland Plain Dealer, said the increasing influence of the Internet on the media has changed the sports media landscape.

Lesmerises said coverage of NCAA games and events have seen a decrease in newspaper coverage since 2005, his first year covering Ohio State, and led to an increase in online publications that are tailored to schools such as the Ohio State University and the University of Alabama.

“There are obviously a lot of papers around Ohio that have interest in Ohio State. The amount of interest has definitely dropped out — that’s just a function, not an interest in college athletics, but a function of the newspaper business,” Lesmerises said. “There are more and more websites. I know ESPN made a push a couple years ago, and they have a beat writer in Columbus that primarily covers Ohio State.

“I do think that in the growing digital world, sports websites have identified college athletics as a very popular thing to cover because of the huge alumni base because the fan bases can be spread out a little bit — you’re not covering just for the people in that town. People go to college then move away or maybe you grew up in Ohio and you like the college or you grew up near a college, then you moved. In college athletics, that loyalty sticks with you no matter where you are. As apposed to pro sports, more often you root for the team that you’re near.”

Since Lesmerises began, media organizations have focused on putting their content on websites due to the extra reach that the Internet provides. Lesmerises said the Plain Dealer originally asked him to write one story a day and if he had more time he was supposed to write any additional content, but after the interest in Ohio State started to expand, the Plain Dealer added two more Ohio State beat writers.

“The amount of content that we produce during football season is busying. We understand that everybody is probably not going to read everything, but we give people a variety,” Lesmerises said. “So if you want to read a long story, we have a long story, if you want to read something quick and funny, we have something quick and funny. If you want a video, there’s a video. We want to give different formats so we could appeal to different types of people which we know are veracious Ohio State fans.”

Lesmerises went on to say the digital outlets are focusing on the “ingrained loyalty, that ingrained passion” that college sports fans experience when they grow up watching a team, and that’s what allowed the media coverage to balloon to its current state.

“I think to some degree, the Ohio State market is saturated just because there are so many websites,” Lesmerises said. “But at the same time, you couldn’t give them enough … the fans want more. There is such great interest in these flagship college programs whether it’s Ohio State, or Alabama, or Michigan or Oklahoma. I think it is a select group that drives interest to that degree, but I think when you have a place like that, and especially a place like that which is winning, you could write about it everyday and there are enough people who want to read about it.”

In Youngstown, however, the coverage of Youngstown State University athletics is bordering on the verge of oversaturating the market. Between the Vindicator, Warren Tribune Chronicle, WFMJ, WKBN and local television and radio stations, you’ll see coverage of every YSU game or event during the calendar year.

Joe Scalzo, former YSU beat writer for the Vindicator, said YSU has seen a decrease in interest since former head coach Jim Tressel left the program to join Ohio State. Since that time, the football program has fallen from a national championship contender and so has attendance numbers.

“In terms of a trend, I think in Youngstown State’s case it actually trended downward just because it had been so big under Tressel, and they lost interest under [Jon] Haycock. Although I think the interest in college sports has really skyrocketed. I think in Youngstown State’s case, ever since the ‘90s, it’s trended downward.”

“In college football, the FCS has gotten more marginalized with the exception of North Dakota State, and I think YSU has kind of suffered a little bit because a lot of the higher level football programs have moved up to the FBS level,” Scalzo said.

Prior to covering Ohio State, Lesmerises spent time covering the University of Delaware. He said the coverage of smaller programs is “a completely different animal” and gave some advice for anyone willing to cover a smaller collegiate program.

“At a place like Youngstown State or Delaware, you better come with an idea. You better be ready to ask questions and you better be ready to bring something to the table because nobody’s going to do it for you. I think it is very different in a lot of ways. I think the key is not to give people the big story — the ‘What’s wrong with the team? What’s happening?’ kinda stuff, but the weird little things like ‘Why does this guy wear different color socks than everybody else?’. Those kind of stories matter these days. When you are on a group beat with a bunch of different writers, you have to find a way to differentiate yourself, but even if you’re the only one covering a team where there’s not as many beat writers, it’s still on you. You still need to find those weird little things.”