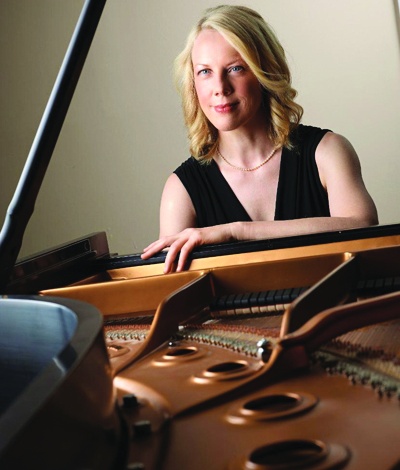 Oltmanns’ dream began in September, 2013 when she kick-started her philanthropic endeavor with a free concert and the initiation of “88 Hearts for YSU” — representing the 88 keys on a piano — with each key costing $114 to reach the goal of $10,000.

“My dream is that before I die, I want the endowment to reach six digits,” Oltmanns said.

Chaney Nezbeth, a development officer in charge of scholarships for the Dana School of Music for the YSU Foundation, said that thanks to many generous donors, the scholarship can finally begin.

“To endow a scholarship at YSU means that it is a permanent and lasting legacy,” Nezbeth said. “Not only have we met the $10,000 goal, but we have far surpassed it.”

The original endowment goal has already been met, but if the principal sum continues to grow so will the number of scholarships to be awarded.

“We are aiming high,” Oltmanns said. “[Increasing the principal] would allow me and my future colleagues to give very generous scholarships and provide a serious means of helping students in need. We want to bring in more talented students to the Dana School of Music. That’s what this is all about.”

Spencer Reed, a graduate piano student in the Dana School of Music, wholeheartedly supports Oltmanns’ cause to create a piano-specific scholarship.

“Monetarily, scholarships can be limited when it comes to Dana because there are so many different instrument groups that compete for them,” Reed said.

This competition between students of different musical groups is what Oltmanns hopes to alleviate with this newly established scholarship.

“Achieving to receive a scholarship is a highly competitive process, and having the opportunity to add another scholarship specifically to the piano area alleviates some of that pressure,” Oltmanns said. “We have been under-represented with scholarship money for pianists for years. This new scholarship will enable us to reach out to new potential students in the hope that we can grow the piano area.”

As with all scholarships, certain criteria must be met to receive monetary compensation. For starters, students must maintain a grade point average of 2.5 or higher and also be enrolled in the Dana School of Music working on a Bachelor of Music or a Bachelor of Art in Applied Music.

Additionally, students must be majoring or minoring in piano, which is Oltmanns’ way of helping her piano students to be able to focus more on their studies, rather than financial worries.

“Having financial support greatly helps in undergraduate degrees that are performance orientated,” Oltmanns said. “It enables the students to spend more time at the instrument rather than having to work [to support themselves].”

Oltmanns hopes to create future fundraising events to expand the scholarship, including a possible collaboration in the works with Steinway Pianos of the Cleveland sector.

With YSU being a Steinway exclusive university, many pianos that would be potentially donated must be denied if they are not of the Steinway brand.

“Steinway is working on a plan where they would sell [pianos which YSU cannot accept] on our behalf, a portion of those proceeds [would come back to us],” Nezbeth said.

Although the endowment goal of $10,000 was reached, it is a policy that the money must remain untouched for one year before scholarships can be awarded, but by the 2017-18 academic year, the scholarship will be fully enacted.