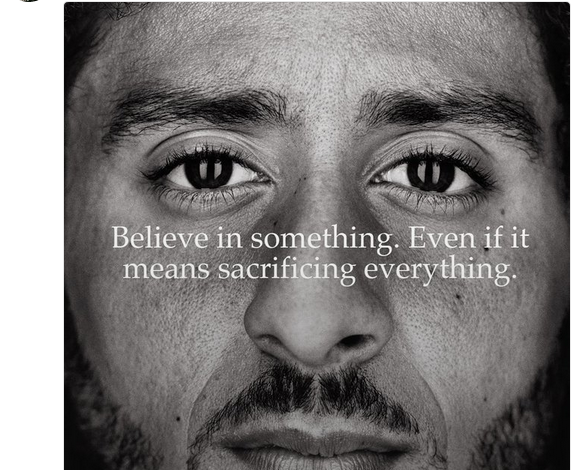 Nike Made the Right Move

Colin Kaepernick wrote in a tweet on Monday, “Believe in something, even if it means sacrificing everything. #JustDoIt,” and Nike unveiled an ad campaign to honor the 30th anniversary of “Just Do It” featuring Kaepernick. The company also plans to donate money to Kaepernick’s “Know Your Rights” campaign.

Kaepernick, the former starting quarterback for the San Francisco 49ers, started a movement when he refused to stand during the national anthem before games in the 2016 season.

When asked why he was kneeling for the anthem, Kaepernick said, “because of the oppression of people of color and ongoing issues with police brutality.”

Keapernick withdrew his contract with the 49ers and has yet to sign with another team.

This new ad campaign was a great move by Nike, but boycotts have quickly emerged with people posting photos and videos of themselves destroying their Nike apparel. It would be smarter to donate to a local veterans organization to stand up for what you believe in instead of boycotting Nike and burning your apparel.

It’s important to understand that Kaepernick was not protesting the military or the United States when he knelt.

The Trump administration has bashed Kaepernick for kneeling, and Trump released statements advising the NFL to fire any player who disrespects the flag. Again, the kneeling movement was by no means an attack on America itself.

Kaepernick’s original contract with Nike was about to expire and his new one is expected to feature him on billboards, commercials and online ads. He is expected to get his own apparel line, according to multiple sources.

“The National Football League believes in dialogue, understanding and unity,” she said. “We embrace the role and responsibility of everyone involved with this game to promote meaningful, positive change in our communities. The social justice issues that Colin and other professional athletes have raised deserve our attention and action.”

This statement came days after an arbitrator denied the NFL’s request to throw out the grievance Kaepernick filed last year, alleging that the league owners conspired to keep him out of the NFL.

Although the NFL stated that social justice issues deserve attention, this contract may make relations with the NFL awkward.

According to a New York Times report, Nike and the NFL announced in March that they have extended their apparel deal through 2028. Therefore, the company provides all 32 teams with game day uniforms embellished with the well-known “swoosh.”

It is important to look at this issue at more than face value. He has “sacrificed everything” to make a difference for the treatment of people of color in the United States. This new contract might be a game changer.

Letter to the Editor

A Year of Mourning