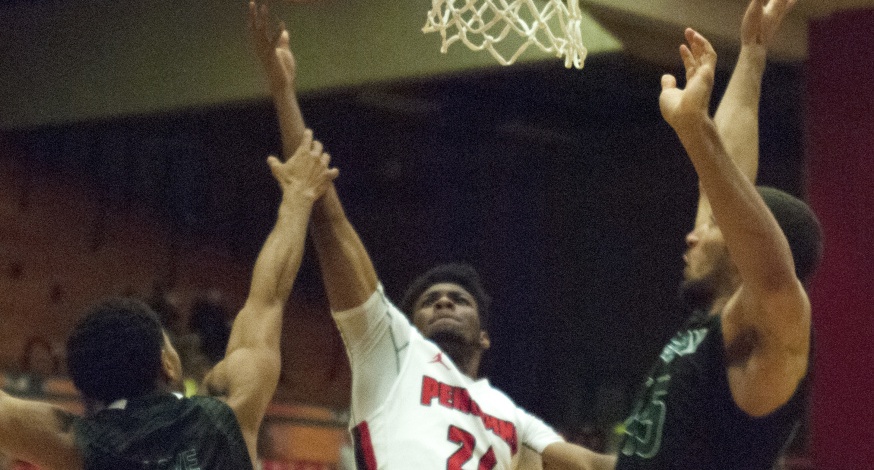 Youngstown State University guard Cameron Morse has been the most impactful player on the YSU roster this season. On Saturday night, Morse had one of the best nights in YSU men’s basketball history.

Morse scored a career-high 44 points against the University of Wisconsin-Green Bay and helped carry the Penguins to a 103-93 win over the Phoenix.

“Coming into the game, honestly, I didn’t know I was gonna score 44 points, but I knew the openings in their defense and I just took advantage of those,” Morse said.

His shooting performance was tied for the ninth-highest total for a single game, and the first time a Penguin scored over 40 points since Reggie Kemp scored 46 points in 1993.

YSU (7-10, 2-2 in the Horizon League) also received help from forward Matt Donlan. The junior contributed 25 points and seven rebounds, and a dunk from Donlan helped the Penguins keep momentum early in the second half.

“Donlan’s dunk was very important because it got the crowd into it and the bench into it, and that’s when we started making our moves,” Morse said.

Saturday night also marked the first time a pair of YSU teammate both scored 25 or more points in a single game since March 19, 2013. On that date, YSU greats Kendrick Perry scored 31 and Blake Allen scored 27.

Morse and Donlan score the first 23 of the Penguins’ 25 points, 14 points by Morse and nine by Donlan. The quick start by the duo allowed the Penguins to 47-45 lead into halftime.

Green Bay was unable to stop the Penguins’ up-tempo offense. Every time YSU grabbed a defense rebound, the Penguins were looking for open players down the court for uncontested shots.

“Coach tells us to play fast all the time. Even when the other team scores, he tells us to get the ball up and down the court and make them have to deal with us,” Morse said. “We pushed it up the court, we got easy baskets and that’s how we got the win today.”

After YSU lost to the University of Wisconsin-Green Bay on Thursday night, YSU head coach Jerry Slocum said he was disappointed with the team’s effort and intensity during the game. He said he wanted his players to start “playing with a chip on their shoulder” and start playing better at home.

After the Penguins’ win over Green Bay, Slocum was satisfied with the way his team performed on both ends of the court and he said he could see a difference in the team’s attitude during the pregame shoot warm ups.

“With our new lineup, we’re really, really good when we could spread the floor and go,” Slocum said. “Now again we missed eight layups in that game [the loss to Milwaukee]. This is more like us—drive it, kick it, share it, play unselfish. All the way, I think every guy on the team gave us a good effort tonight, and that’s not an easy team to guard. They came in 3-0 in the league for a reason. That’s a quality basketball win for us.”