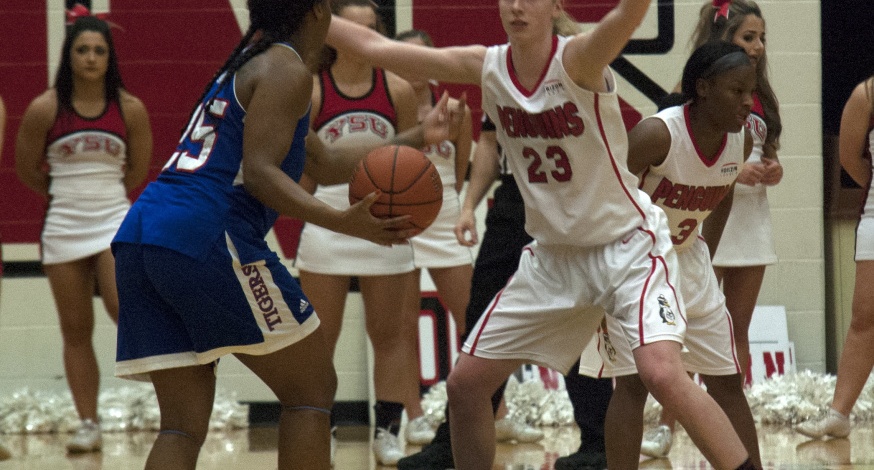 A strong second half allowed the Penguins to pull away with a 69-58 win over the Tigers on Wednesday night.

Tennessee State (5-8) outworked YSU on the boards in the first half. The Tigers came down with nine offensive rebounds that led to nine second-chance points. The Penguins trailed 35-27 at halftime.

But YSU (10-2, 1-0 in the Horizon League) was able to turn things around in the second half. YSU was aided by Tennessee State foul trouble early in the second half. The Tigers’ foul trouble was able to put the Penguins at the line with just under six minutes to go in the third quarter. The Penguins went on a 12-0 run to start the third and took a 49-41 lead into the fourth quarter.

“She attacked pretty much the whole second half,” Barnes said. “When she gets into the lane she creates a lot of problems for the other teams because if they don’t help, she’s a really good finisher, and if they do, she could kick it out for the three. So her attacking again made a huge difference in the second half.”

Barnes went on to say the Penguins made rebounding and execution points of emphasis in the second half.

Now the Penguins will enter the rest of their Horizon League schedule. YSU played one conference game earlier this season. The Penguins played Oakland University on Nov. 28. The game was originally scheduled for Monday night, but Barnes said he’s glad the schedule change was made because it give the team more time to focus on Saturday’s upcoming game against the University of Detroit Mercy.

“We were supposed to play Oakland on Monday night, but we got that game out of the way so we could really focus on Detroit and try to get that done,” Barnes said.