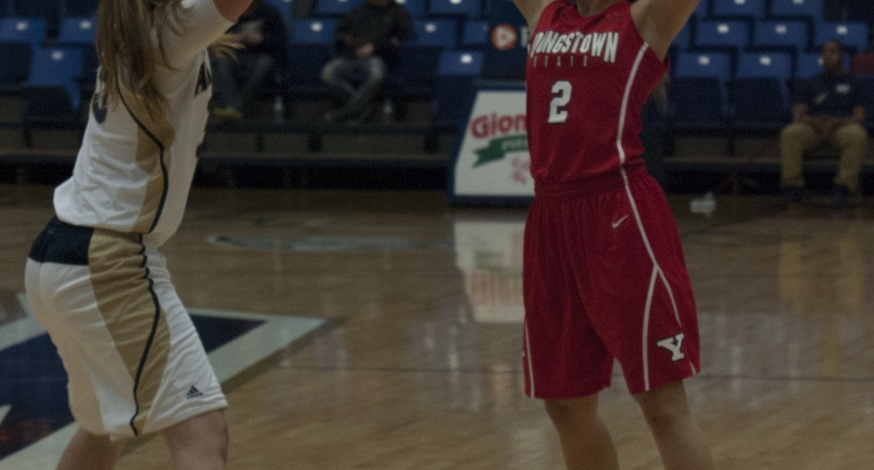 The Youngstown State University women’s basketball team appeared sluggish in the team’s 74-49 loss to the University of Akron on Monday night. The Zips seemed to get their hands on every loose ball and rebound.

YSU (9-2, 1-0 in the Horizon League) got off to a decent start. The Penguins took a 4-0 lead in the first two minutes of the game, but things started to decline from that point. Akron went on a 14-0 run immediately after and eventually took a 16-6 lead at the end of the first.

YSU made a couple attempts at putting another run together, but the Penguins were unable to hold onto the momentum long enough to make a significant dent in the deficit.

The Penguins’ offense couldn’t get their shots to fall all night. The Penguins shot 29.5 percent from the field and 5-23, 21.7 percent, from behind the 3-point line.

“It was extremely frustrating. We came out flat and kinda stayed flat the whole game,” YSU head coach John Barnes said. “I thought they really played hard and played good. They kinda just took control of the game right away and kept doing it pretty much the whole game.”

Akron (6-5) was able to generate second-chance opportunities throughout the game. Akron outrebounded the Penguins 58-27, including 23 offensive boards.

“We work on that everyday and I think that they wanted it more today. And showed it out there and that’s how you get a lot of offensive rebounds,” Barnes said.

Part of their success on the boards could have been a result of YSU starting forward Sarah Cash’s foul troubles early in the first half. Cash picked up her first two fouls in the first quarter and had to spend the rest of the first and part of the second quarter on the bench.

“It’s big…she’s our ‘go to’ player,” Barnes said. “She’s our leading scorer, she’s our leading rebounder and she’s got to sit most of the first half. Now we’re down 15 at half [halftime] and you got to try to climb back. It’s tough but that’s life.”

Akron’s Anita Brown, a native of Warren, Ohio, gave the Penguins headaches. Brown led the Zips with 19 points and 14 rebounds. The senior guard tracked down long rebounds and frequently scored on second-chance opportunities.

Despite the fouls, Cash was able to lead the Penguins with 15 points and four rebounds. Smolinski was second on the team with 10 points.

The Penguins will have some time off before their next game. YSU’s next game will be against Tennessee State University on Dec. 30 at the Beeghly Center. Tip off is scheduled for 7:00 pm.