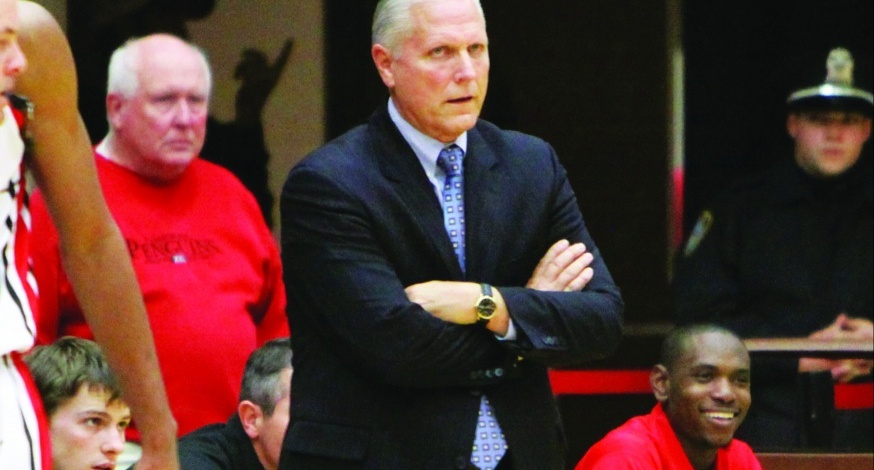 In 2005, Jerry Slocum walked onto Youngstown State University’s campus as one of the most decorated men’s basketball coaches in the NCAA. Over 10 seasons later, and a number of headaches along the way, Slocum has reached a milestone that few coaches have an opportunity to fathom … 700 wins.

The YSU men’s basketball team defeated the University of North Dakota on Nov. 23, and at long last the wait was over. Slocum has become the 37th head coach in the history of the NCAA to join the “700 club,” and the win is one more accomplishment to add to his 40-year coaching career.

Slocum entered this year with 27 winning seasons, 19 20-win seasons and ranks eighth among active Division I coaches in career wins.

Anticipation has grown for Slocum’s record since YSU’s last win on Feb. 15. The Penguins lost the last four games to end last season and began this year with a 0-4 record. Slocum had his first chance to address the media after the Penguins’ postgame press conference on Wednesday.

“It was special. It’s more special today than it was after the game on Monday. Monday during that game, our team needed a win,” Slocum said. “We had played so well with no positive outcomes, and after the game it became more special. I had probably 75 texts and emails from players — some players from all over the world. My high school football coach and basketball coach drove in today, five hours, to be here.

“Obviously it means a great deal in terms of my wife in fact that she’s been a coach’s wife this long. It meant more as the days went by to see how it meant more to other people … maybe not that much to me. I’m thinking about three out of four at home, what we got to do to get it back together, how we got to play, and meanwhile, everybody else is kind of excited about it. So it was nice.”

Slocum has never been a coach who has focused on statistics or achievements. Instead, he focused on the execution and success of his team. Win or lose, Slocum would frequently enter the basketball film room where the postgame press conferences are held and tell the media that his players need to improve.

Slocum has a 119-194 record at YSU. But in his defense, unlike football or baseball, Youngstown has never been known for its plethora of basketball talent. So he’s had to focus on recruiting outside of Youngstown and drawing recruits to YSU. Some of the most iconic players to play at Beeghly Center in the past 10 years have come from out of state.

Forward Bobby Hain, former guard Marcus Keene and former All-Horizon League guard Kendrick Perry were all recruited from out of state to join the YSU program.

After the win against North Dakota, Slocum thanked his wife during a postgame interview. He also took the time to thank his wife again on Wednesday.

“You can’t have a person who’s more of a ‘foxhole girl’ than her. I mean she’s … my best friend and we’ve been through it all,” Slocum said. “When you think about all the wins and the losses, the grumpiness, the being gone raising our kids, being gone for two, three weeks at a time recruiting and every time we’ve moved — and we’ve moved a bunch — I’d come to her and say, ‘Hey, somebody contacted me about a job,’ she’d look at me and say, ‘Lets go.’ She’s a special person.”