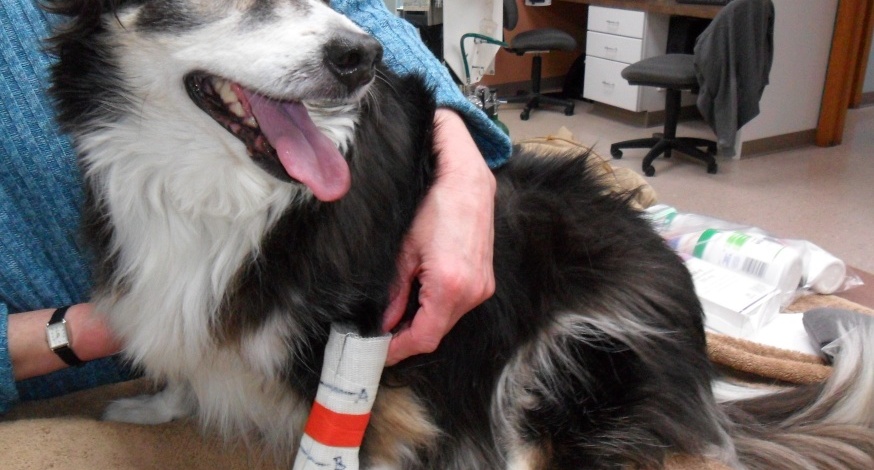 Shelby, a 12-year-old Collie, has several health problems that make it difficult to move around, but six Youngstown State University students are using 3-D printing technology to help improve her mobility.

The students are working with engineering professor Guha Manogharan to develop a brace for Shelby.

Shelby belongs to Laurie Wittkugle, an administrative assistant in the College of Science, Technology, Engineering and Mathematics.

Shelby has all of her limbs, but she became crippled at an early age. Several conditions, including progressive rheumatoid arthritis, make it difficult for her to move around.

“Shelby doesn’t pick her paws off the ground anymore when she walks,” Wittkugle said. “She drags them on the ground. As you can imagine, her paw is very sore from this.”

The group is focusing on Shelby’s left leg, which is where her deformation started.

“Shelby began compensating for this deformation by reducing the weight in her front left limb and distributing it to the others,” Wittkugle said. “As a result, all her other limbs began to be affected.”

Doll said they want to assist Shelby’s mobility and try to improve her quality of life. The brace will add carpal tunnel support and reduce tension on her paw. It will also add padding and traction to help her move around.

“Our 3-D printed designs are going to be custom fit to the exact state of her limb and paw now,” Doll said. “The long-term goal is to make a series of 3-D printed braces that slowly realign her limb such that it is not deformed anymore.”

Householder said they conducted a lot of research to determine what could be done and how they could do it. He worked in conjunction with Luke Lukasko, Shelby’s veterinarian, to analyze X-rays and convert them to 3-D.

Schilling researched what materials to use, particularly what they should use to line the brace.

“Shelby has reactions to various materials, and we needed to add a comfortable thin layer lining the inside of the brace, so we don’t add any extra discomfort to Shelby,” Schilling said.

Other students have looked into other animals that have been assisted by 3-D printing and analyzing the gait of dogs.

Clark said projects like this could lead to inexpensive custom braces for animals and humans as well.

“Any brace or support that is specifically custom fit for the animal or person that it is intended for will always assist better than standard fit,” Clark said.

Alsairafi said they’ll be happy if they can make Shelby’s life a little easier.

“She still has the drive of a really young dog,” Alsairafi said. “She wants to go outside and chase the squirrels, but she just can’t. Our brace is not going to allow Shelby to chase squirrels again, but hopefully it is less painful for her to walk around.”