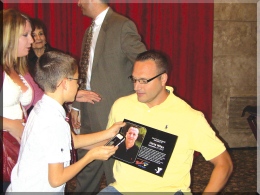 Chris Niles is surrounded by family and friends on Thursday when he recieved the YMCA Salute to Courage award. Niles was hit by a falling tree on March 3, 2011, leaving the lower half of his body paralyzed. He has high hopes that with therapy and stem cell treatments, he will regain use of his legs. Photo by Joe Catullo Jr./The Jambar.

On March 3, 2011, Chris Niles was cutting down a branch in his woody backyard. The tree fell, and Niles wasn’t able to get out of the way in time.

He lay in the woods for more than three hours before he was found. He was wearing a red hat that day, which he propped on a branch that allowed his family to spot him.

“I remember it was late at night when my mom found out, and she told me, ‘Just pray for him,’” said Elizabeth Yazbek, a Youngstown State University graduate student and Niles’ cousin. “We weren’t sure if he was going to make it or not.”

The tree shattered Niles’ spinal cord from the sixth thoracic vertebrae, leaving him paralyzed from the chest down. Wheelchair-bound, he attends therapy three times a week to work out his upper body.

Niles was told that he would never be able to walk again. As a father of two sons and an active individual before his accident, he wasn’t able to accept this.

He now travels to Panama a few times a year to receive stem cell treatments. So far, he’s had four treatments. The treatments have been working, he said.

Niles now has limited feeling in his toes, and he’s shown progress toward being able to walk again.

So, to help with expenses, Yazbek plans to run a marathon; all of the money she raises will go toward her cousin’s treatments.

“I think it’s amazing that she’s running to fund my treatments and other offset expenses,” Niles said. “I’m very blessed, and I have a great family.”

Like Niles, Yazbek is an active individual and wanted to use her skills to help her family. Although she hated cross-country when she was in high school, she’s run four full marathons in the last four years.

“I was always running marathons, so this is my chance to do something for Chris,” Yazbek said.

Yazbek will run the Towpath Marathon on Sunday. Her cousin — Lynn Zvara, a part-time English instructor at YSU — will run half of the marathon.

“When I found out about Chris, I just asked, ‘What do they need me to do to help them?’” Zvara said. “We have a very big, loving family. It’s just who we are.”

Since July, Yazbek has promoted through her church, handed out donor forms to friends and family to distribute, and used email and social networking to spread the word.

Yazbek said she looks up to Niles.

“Even though he is in a wheelchair, he’s not disabled. He’s had a lot of low points, but he always pulls through,” Yazbek said. “I’ve been through obstacles in my life, but not like Chris.” Yazbek was born deaf.

Zvara said that never stopped her and that Yazbek is a very driven person. She’s proud of Yazbek for being the mastermind behind running the marathon for Niles.

“It definitely shows you that there is always someone who has it worse. I tell people all the time that if they think they have it bad to look at Chris, who had his entire life pulled out from underneath him,” Zvara said.