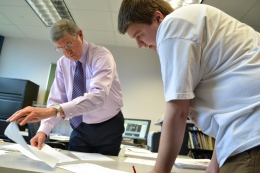 As the spring semester comes to a close, 21 faculty members will retire, leaving their legacy and mark on Youngstown State University.

“It isn’t just about all of us getting old, but it also has a lot to do with the demographics of the university,” said Gary Salvner, 14-year English department chairman. “YSU became a university in 1968, and there was a significant increase in enrollment and hiring in the early ‘70s, so it has a lot to do with us just spending a lot of time here and moving on.”

Salvner has spent 35 years at the university. He said he is grateful for both excellent colleagues and students.

“This has been a stimulating and rewarding place to have a career,” Salvner said.

Salvner said the English department will renew itself.

“The department will be fine and will continue to serve students, the profession and the university and community well,” he said.

At the end of his career, Salvner said his most vivid memories are of the students.

“That mystery of starting a new class and engaging a new group of students to think, respond, inquire, challenge,” he said. “That’s the real satisfaction of our profession.”

Nancy Mosca, a professor of nursing, will retire after 30 years at YSU. She said the nursing department is a growing division of the Bitonte College of Health and Human Services.

“I am sure they will recruit another nurse faculty to continue on with work I have been involved in,” Mosca said.

She recalled one of her fondest memories. It was when the nursing department held a nursing alumni reunion during YSU’s Centennial Celebration in 2008.

“We flooded the Cushwa Hall atrium area with over 225 nurses who came back to see their alma mater that year,” Mosca said. “It was exciting to talk to them and hear where they were in life and what they were doing in their nursing careers.”

Louise Aurilio, an associate professor of nursing, said Mosca will be sorely missed as an academic leader.

Aurilio said Mosca has been instrumental in the department’s growth.

“She is the first one to volunteer for any project or job that needs done, as well as offering to assist any faculty in need,” Aurilio said. “When faculty have a question, she is the first person that they seek out.”

Aurilio added that a quality faculty member is hard to replace.

Khawaja said more than 30 searches are under way for next year.

“We are constantly replacing faculty,” he said. “Last year, we lost at least 20 members, also.”

“The faculty retirements are not a budget issue unless we decide to eliminate faculty,” Khawaja said.

Louise Pavia, a professor of human ecology, will return next year under extended teaching service. She said it’s a good thing to help ease into retirement.

She said that doing so will allow her to continue preparing students to teach preschool children.

Pavia said that, although the pre-kindergarten department is down a faculty member, she will assist new faculty, thus benefiting the department’s continuity.