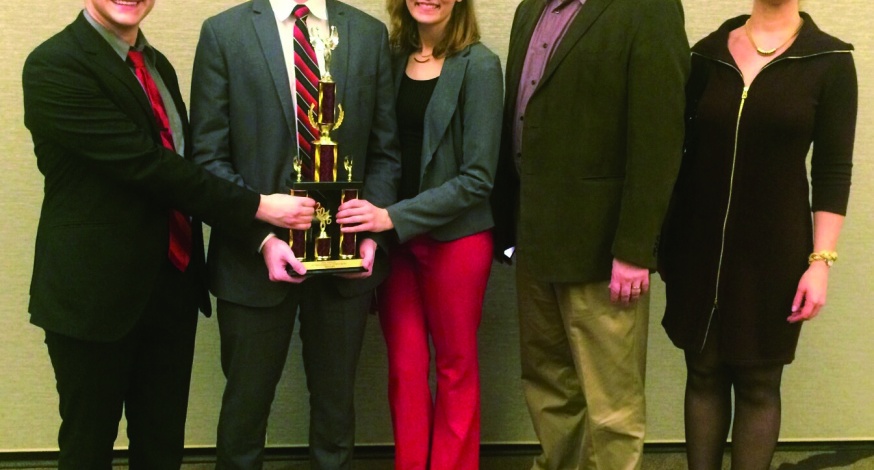 The Intercollegiate Ethics Bowl is a forensics competition hosted by the Association for Practical and Professional Ethics that pits teams against each other to work through ethical dilemmas. This weekend’s competition was the organizations 20th.

Thirty-six teams represented their universities at the national tournament culled from about 250 that competed in regional tournaments. Lindsay Heldreth, Jacob Schriner-Briggs and Tyler Miller-Gordon competed for YSU.

After qualifying for a bracket of eight, the team bested Taylor University — the winner of last year’s event — in the quarterfinals. YSU then fell to a team from Whitworth University, a private liberal arts school from Washington state, in the finals.

Schriner-Briggs said Alan Tomhave, professor of philosophy at YSU, approached students about forming a team for this year’s competition.

Schriner-Briggs said this experience was special both because of the success they experienced, and because it has a less cutthroat competitive nature than other forensics competitions.

“I love competitive forensics of all kinds from debate in high school to moot court to ethics bowl,” Schriner-Briggs said. “[Ethics bowl] was much friendlier.”

Miller-Gordon said the focus was more on reaching a solution and having a conversation.

“It was especially enjoyable for me, because it was more of what I’m like as a person, because I’m a more amiable person,” Miller-Gordon said.

Miller-Gordon said the preparation with professors from the philosophy department prepared them for the competition.

“We got to work closely [with] and really explore the minds of different faculty members,” Miller-Gordon said.

Heldreth said it was fun to compete with other people from her major who share the same interests while putting things she’s learned to use.

“Just being able to take all that I’ve been taught through the philosophy department and apply that in a forensics competition,” Heldreth said. “It was a good experience.”

All the students said they were excited to represent YSU and thankful for the time faculty members spent with them.

Schriner-Briggs said he also enjoyed working with professors and friends he has made during his time as a philosophy student.

“It was cool to see kind of my whole academic experience at YSU culminate in this particular tournament,” Schriner-Briggs said. “And to have the experience of the success that we did was like the cherry on top.”

The Jambar: What’s in a Name?